I cooked this for a gathering at AA and EM's place 2 Saturdays ago. EM liked it very much and has been asking me for the recipe. Last Friday EM came over to my place earlier (before the start of our French-Chinese lesson) and I took the chance to show her how to cook this.

Vegetable soup stock. We used miso paste instead, roughly 1 tablespoon of miso for each large individual bowl/serving of soup. Note: Do not use meat soup base, especially not beef stock because it will overpower the subtle flavour of the bamboo fungus.

Salt or soya-sauce to flavour. Note: We skipped this since miso contains salt itself.

Optional: Sweetener, e.g. sugar, molasses, or honey. We used 1 tablespoon of pure liquid molasses. If using honey, control the amount so that it would not overpower the subtle flavour of the bamboo fungus.

Optional: 10 water-chestnuts, diced for additional crunch in the soup.

Note: All measures are approximate, add more/less as per your preference. As I explained to EM, Chinese cooking often do not rely on exact measures because so much is determined by the quality of the ingredients. If you have an excellent quality ingredient, you may want to add less; and conversely add more if the ingredient quality isn't so great; so as to maintain the overall harmony of the flavours. 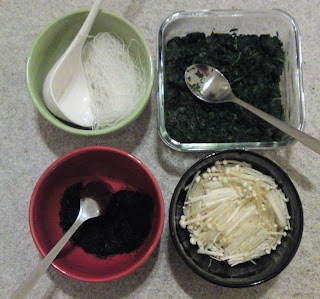 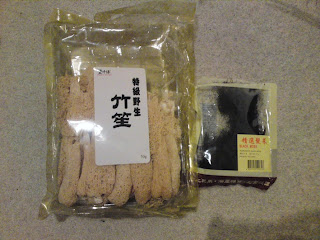 2. Rinse the other ingredients.

3. Chop and throw away the dirty roots of the enoki mushrooms. Chop into 3 approximately-equal segments lengthwise. Split the large clumps (lower end, near the roots) into smaller clumps about 1cm x 1cm thick.

4. If using frozen chopped spinach, defrost it in the microwave.

7. At the final 5min of cooking time, add the spinach, enoki mushrooms, and water chestnuts (if using). Stir the ingredients to distribute it. Taste a tablespoon of the soup and add sweetener to adjust the flavour.

8. Scoop into serving bowls and serve immediately. Do not let the soup sit around or the mung bean vermicelli will expand and absorb most of the liquid.

Sorry, no final product photo. We were so happy eating that we forgot to take a photo of the completed dish again. :) If you need a sample, I recommend that you go to Ling Zhi vegetarian restaurant in Singapore to try the original "braised spinach soup with bamboo fungus".
Posted by Winking Doll at 10/29/2012 01:25:00 AM